Review: 'Unto Us a Son is Given'

Donna Leon continues to explore ambiguity in human emotions and how situations develop into life-changing decisions in her latest Brunetti novel. This time, the exploration centers on family ties, including new ones and those that last throughout the years.

Unto Us a Son is Given centers on the concern Brunetti's father-in-law, Count Falier, has for one of his oldest friends. Gonzalo Rodriguez de Tejada is a long-retired art world mover and shaker who no longer has that world's respect. But he does have a much younger man in his life and wants to adopt this man to be his son. That would mean inheriting his still considerable estate. The count and others are aghast at his plan. Brunetti is more in the live-and-let-live camp, and doesn't understand the fuss. But he will do a little looking into the young man's bona fides to ease his father-in-law's concerns.

But that's not how the world works. Before much is discovered, Gonzalo suddenly drops dead on the street while away from home. As his older friends gather for a memorial service to honor his friend, someone else dies. This time, it's murder.

As is usual when visiting Brunetti, the ruminations and philosophy are draws. This time, the good commissario ponders prejudices acknowledged and unconscious. How do any of them feel about each other if there is a label attached? And if the prejudicial beliefs were true, how deep would they go? How far would they extend? What about criminals in general? Are they born this way? Because this is Brunetti, he makes connections between these lines of thought and Calvinists and Greek tragedies he is now reading again for the first time in years.

Is there predestination? Do the gods dictate someone's journey? And how does revenge, or justice, tie into all of this?

Heady ideas, but ones that are tied to the deaths in this book, the 28th Brunetti novel. As Guido himself notes in this book, how can a writer make something horrific not, well, beautiful, but rather powerful? That's what Leon does here. Families, love and how we feel underlie this whodunit.

©2019 All Rights Reserved TheLitForum.com Reviews and reprinted by permission
Posted by Lynne Perednia at 8:05 AM No comments:

Review: 'The Man Who Sold America'

From the introduction, "Welcome to Gotham" with on-point comparison of today's occupant of the White House to a Jack Nicholson signature performance, to the epilogue about who we really are, Joy-Ann Reid tells us about ourselves in the age of Trump, how we got here and what we must do next before a new chapter can be written in her new book, The Man Who Sold America: Trump and the Unraveling of the American Story.

In concisely researched sections, Reid, host of MSNBC's AM Joy, shows the origins of Trump, the current state of his party, the media and government. It's a perfect storm of resentment, yearning and complacency. She begins with the 2016 election, laying out not only the vote counts but also the underlying studies that show why anyone would vote for someone who had no political experience but plenty of bluster. That the narrative is calm and fact-based sets the tone for the book. This is not a political rant. This is a reflection on the current point in the American story.

Information from a study published in the Proceedings of the National Academy of Science in April 2018 displays what "economic anxiety" really means for white Americans who voted for Trump. Regardless of their actual economic status, it was their perception that mattered. That perception, as seen in media feature stories still being published on a regular basis, is the fear that white Americans are being crowded out by people of other races, ethnicities and religions, regardless of their immigration or citizenship status. Diana C. Mutz of the University of Pennsylvania political science department noted in the study that candidate preference was connected to a political party's position on American global dominance and an American population that is becoming majority-minority. In other words, if white Americans feared no longer being part of the dominant group, they voted for Trump.

At the same time, American culture is becoming more divided, with groups staying together based on how they view the world and less genuine communication among different groups. Reid notes the work of Robert P. Jones in a Public Religion Research Institute study done with The Atlantic in 2017 to show the fear among those who do not like the increasing diversity of America. In a chapter on the media, Reid adds how what we believe determines where we get our news. Facts themselves have become a malleable commodity.

In addition to quoting other studies, Reid also goes into the cultural aspect of how Trump's base was built and why it remains true to him. Britain is dealing with the same resentments that led to Brexit, so it's not just an American phenomenon.

One of the strongest chapters in the book compares and contrasts the journey of South Africa following apartheid to the United States since the Civil War and Jim Crow eras. Reid reports how white people in both nations have feared change and losing power, and how they are responding. The countries are different, and Reid is clear to note that. But seeing the paths the two countries have taken and the origins of conspiracy theories in South Africa that have made their way to the United States is illuminating. What unites us is stronger than what divides us, but what is it that unites us? And divides us?

Reid tell us how we got here and how we see ourselves. One of the great take-aways from reading The Man Who Sold America is that until and unless Americans face up to who we are, things are not going to improve for anyone who isn't already one of the .01 percenters. Superhero mythology is a motif in the book. But Reid makes it clear we should not be holding out for a Superman or Captain America or Wonder Woman. As Joan Didion said, "We tell ourselves stories in order to live." What is the new chapter in the story we tell about ourselves? It is up to us to write it.

©2019 All Rights Reserved TheLitForum.com Reviews and reprinted by permission
Posted by Lynne Perednia at 10:25 AM No comments:

Review: 'With the Fire on High' 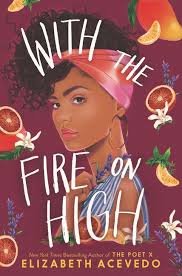 In The Poet X, Elizabeth Acevedo crafted a novel in verse that expressed the wonder, questioning and determination a young woman feels. In her sophomore novel, With the Fire on High, Acevedo brings to vivid life another young woman who infuses her life and those around her with joy, pride and fierce love.

Emoni is in her senior year, a good but not great student who is more interested in her family and creating magic in the kitchen than studying. It's a focus Emoni needs. She's been raised by her grandmother in Philly. Her father went back to Puerto Rico when her mother died. Emoni and her grandmother are now raising Emoni's daughter. When not caring for Babygirl, hanging with her great friend Angelica, or appreciating her grandmother, Emoni also keeps her cool when her ex-boyfriend (a generous term) picks her three-year-old up for visitation. Even Tyrone's snooty mother doesn't knock Emoni's balance. All the irritations fade into the background when Emoni gets to be her best, true self -- creating food in the kitchen the way a musical genius might improvise a symphony.

Even with a plate this full, our heroine is about to see if she can handle more. There is a transfer student this year -- a fine young man who sees Emoni's beauty and strength straight away. And there is a new elective class, about restaurant food and service, taught by a real chef. Emoni makes the cut for the class, as does the new guy, Malachi. But it is no cake walk. Chef Ayden recognizes her ability. But he does not appreciate her last-second improvisations. He teaches her that you need to know the rules in order to break them.

For someone who has weathered her circumstances with aplomb, Emoni remains unsure if she can reach out higher, wider and deeper. A class trip to Spain, to be able to work for a professional chef, is her chance to find out if she has limits beyond what she has placed on herself. This is especially true considering the cost of being able to go.

The wisdom, grounded in reality, and the joy that are the essence of Emoni's story, along with the poetic flow of Acevedo's writing, make With the Fire on High a reading experience as filling as a grand meal prepared with love and a secret ingredient or two. It's also a grand inspiration to have a blast in the kitchen, making one's own music.

©2019 All Rights Reserved TheLitForum.com Reviews and posted with permission

Posted by Lynne Perednia at 11:08 AM No comments: