DC Lacey Flint returns to star, with DI Mark Joesbury of Scotland Yard, in her second thriller by Bolton. This time, she's sent undercover by Joesbury to bring back intelligence about Cambridge students. Their suicide rate is far higher than normal and, unusually, more of them are young women than men.

But before the reader discovers this, the story opens with Lacey on top of a tower, perhaps ready to jump. Before finding out what happens, Bolton goes back in time to the beginning of her assignment. The author then goes back and forth, in very short chapters, among the narratives of Lacey, disabled Dr. Evi Oliver -- the Cambridge psychiatrist who knows Lacey's assignment and who is herself plagued by occurrences that terrify her -- and some of the earlier suicide victims. Plus Joesbury.

The terrors that the various victims suffer are indeed harrowingly portrayed. When Lacey finds herself not knowing if bad things are happening to her, or if she is dreaming, the suspense factor is increased. Bolton is a master at racheting up the suspense.

Add into the mix Lacey not being certain who she can trust, and the suspense tightens even more. For instance, there is the physician of one of the victims. She survived but is a burn victim who still cannot speak. What should Lacey think of his interest in his patient, or in Lacey herself?

As with many thrillers, disbelief must remain suspended for the reader to continue turning the pages. As long as one does not question too closely how believable any of the set-up is, Bolton is masterful at the ever-increasing pace of both danger and revealment in unspooling the story.

The revelation of what's actually going on may or may not appeal to readers, depending on their tolerance for sadism or conspiracy. The story concludes with an abundance of feminine jeopardy and, for professional and educated women, a preponderance of dependance upon their strong menfolk to see them through. Perhaps because of the setting, it's hard to not compare the ending here with that of Gaudy Night and reflect on how Harriet Vane, back in 1935, was her own person and didn't want even Lord Peter to rescue her. It's quite the contrast, and the fact Dead Scared comes nearly a century after that most celebrated Oxbridge novel is not, in the end, cause for celebration.

FTC discloser: A digital galley of the book was provided by the publisher via NetGalley.
Posted by Lynne Perednia at 7:38 AM No comments: 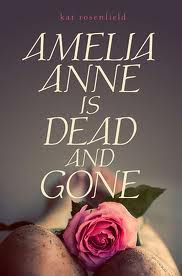 Becca has always known she isn't meant for her dump of a small town. The last year has been somewhat better because of time with her boyfriend, James, a dropout who grieves for his mother after he watched her die from cancer. On the night she graduates as salutatorian, they have sex in the back of his pickup out on the fields, under the stars. Then he dumps her. But James soon calls, unsure if they've broken up. He knows she's going to leave him at summer's end anyway but he is a lonely, James Dean-type. Maybe they need each other still.

That same night, their small town is rocked by the discovery of the body of a dead young woman out on the road near the site of where James parked his truck. And the real story of Amelia Anne is Dead and Gone unfolds.

In lyrical, layered writing, Kat Rosenfield writes about Becca's town, her home life, her relationship with James and how the investigation into how the mystery woman died plays out. The ramifications of assumptions and what people think they know about each other are devastating. Becca, in particular, shows both the benefits of knowing so many people in a small locale and the drawbacks to the same. Becca displays both perseverance and folly, wisdom and flightiness. In short chapters spaced out between Becca's story, the reader learns about the dead woman and what led to her death.

This is sophisticated writing replete with lyricism, layers and language. It is not, however, flowery. The first F bomb comes on page 7 in this realistic depiction of teens embarking on adulthood. Becca shares two bottles of wine with her unhappy mother one night and boozes it up the rest of the summer. For older teens and adults, this is a deeply affecting story told well.

©2012 All Rights Reserved CompuServe Books Reviews and reprinted with permission
Posted by Lynne Perednia at 7:28 AM 2 comments: