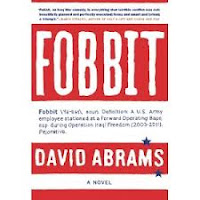 While a hobbit lives in a hole in the ground -- a comfy, lovely hole -- a Fobbit lives within the confines of a Foward Operating Base in a war zone. It's neither comfy nor lovely, and it isn't always safe. But it's the life many characters have in Fobbit, the debut novel by David Abrams, based in part on his experiences on active military duty in Iraq.

Chance Gooding Jr. is "the Fobbitiest" of them all. As a Public Affairs Officer, he punches out press releases from inside Saddam's former Baghdad palace the way major league sluggers knock baseballs out of the park. No matter how many times he has had to write a variation of the same old story -- one or more of our people were killed or wounded, so were so many of theirs. Then the press release goes up the chain of command and comes back down after every comma is fussed over and imbedded cable news reporters broadcast more complete information hours earlier -- often from the scene itself.

Off-duty, Gooding reads. Catch-22 speaks clearly to him, no surprise, but he also tries to live in the worlds of Dickens' Hard Times, of Don Quixote and more. Stories are important to Gooding. He would agree with Joan Didion that "we tell ourselves stories in order to live".

The truth is elusive in a military organization, as Gooding's superior officer, Lt. Col. Eustace (Staci) Harkleroad's letters to his mother prove. These are master classes in how to shade, evade and twist the facts just enough to show how delusional some people are. And, of course, not a delusional, pumped-up "word to Jim Powers at the Murfreesboro Free Press or the ladies at the First Church of Redemption". Of course not.

A real military man is Lt. Col. Vic Duret, who keeps his sanity by focusing on his dog and a certain part of his wife's anatomy back home as he and his men patrol outside the Green Zone. As long as he doesn't remember that his brother-in-law was in the Twin Towers. That's an image he cannot face but cannot forget. Instances when Duret and his men are on patrol show but one of Abrams's writing strengths. He easily and economically puts the reader in the middle of the chaos that is a routine patrol, sharing not only what the service men and women do right and honorably, but also how stacked the odds against them are and how quickly and randomly events can turn tragic or comic, or both.

Although many events in war, like the rest of life, are random, the catalyst to the plot here is Capt. Abe Shrinkle. He's the Frank Burns of our story, a would-be take-charge kinda guy who should never have left home. Shrinkle is the kind of guy other soldiers are tempted to shoot. When he makes one mistake too many, he's taken off patrol and put in charage of the exercise equipments and towels at the FOB rec center.

When Shrinkle realizes a slight moment of truth, Abrams writes with straight-to-the-heart accuracy in a passage powerful enough on its own. But later, another character is thrust into a turning point, and then feels "part of himself break away" on a metaphor that recalls the earlier passage. The eloquence in Abrams's purpose in writing by connecting the two passages is wisely used and pays off handsomely.

Like the other great war novels that show the absurdity of those who organize war and those who are placed in charge, Fobbit makes one wonder how any combat victories were ever achieved. Abrams also creates memorable characters who bring to life the years of strife, boredom and suffering endured by troops who were sent to fight and then forgotten by a public wrapped up reality TV and recession hardships. Like Willie Loman, the characters who live in Fobbit deserve to have attention paid to them.

Posted by Lynne Perednia at 2:18 PM

Ideas and wonderings aboaut people, places and spaces are why I love books. Here are some of the thoughts they have inspired in me are posted.
Currently, I am a K-12 public school librarian. Past lives include being a small town daily newspaper editor and paralegal. Whatever the day job, reading and writing about books has been a constant.

The books I review and comment on are sent by publishers and authors, or I have purchased them or checked them out of the library. I do not accept self-published material at this time.