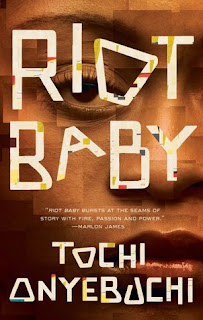 A short novel that builds its emotional force like a wave that swirls and soars and crashes, Riot Baby tells the story of a brother and sister in black America.

Tochi Onyebuchi's first novel for adults centers on Kev, born during the Rodney King riots, and his older sister, Ella. She has a Thing, a gift, a curse that puts the novel in the fantasy genre. But the Thing is used as a way to show the scope of how black people have been humiliated, hurt and killed in the last 30 years.

As a child, Ella could see the future of the people she encounters. In time, she is able to astral project. She grows powerful enough that she can take her brother on journeys. When Kev goes to prison, it's a way for them to remain connected. When Kev is put in solitary, Ella can be there and she can take his spirit out of his cell.

His time there is brutal, and that it doesn't rob Kev of his soul is testimony how perhaps we are not all monsters inside, even though the system is in place to try to do that, one way or another:

The places that made money off you by charging you for tickets and scheduling court dates when they knew you couldn’t make it, then fining you for those missed dates if they don’t jail you first, then they say they’ll graciously set you up with a payment plan, then you get a day or two late one month and they put out a warrant, then when they do get you in jail, you gotta post $2,000 bond or some shit like that that they know you can’t pay, and that’s how it starts. While in jail, you miss your job interview, and when you finally get your day in court, they say you gotta change out of your jumpsuit, but you gotta put on the same funky clothes you spent however long getting arrested in and you gotta stand in that courtroom smelling like rotten poom-poom, handcuffed, and you gotta do all you can to even feel like a person still. If you got family, maybe your mama can borrow against her life insurance policy to post your bond.

It's a system meant to keep black people down.

Maybe they kill you in here. But maybe you make it out. Not out from behind bars, but out of wherever it is they try to put you when they put you behind bars.

Toward the end of the book, as Kev's life changes, this is made even more explicit. His life, Onyebuchi shows, does not belong to him regardless of his legal status. It's too real, too true to be dismissed as speculative fiction.

Ella is angry because of her Thing, because of her mother's lifelong hurt, because of her brother's imprisonment. But she also is on a quest to see as much of the world and the way people are as possible. The sections in which she passes unseen through throngs of people is both a use of the gift that her author bestowed on her, and commentary on how black people are seen unless they are wanted for something.

Onyebuchi whirls up an epiphany of what might be at the end. There is the searing desire for a new beginning, and it is as painful as the scenes of new life that are depicted earlier in the story.

Onyebuchi has written several YA novels, and brings so many parts of his wide educational background to inform this novel. This is a man who has earned an undergrad degree from Yale, an MFA in screenwriting, a master's in economic law and a law degree from Columbia Law School. He is a strong advocate for others, being part of the reason social media discussed #PublishingPaidMe to reveal racial disparities in the book world.

Also, through June 24, there is a social media campaign to purchase at least two books by black authors. Whether you love to read literary fiction, YA fantasy, romance, mysteries or nonfiction, there are multitudes of volumes from which to choose.

Some of my favorites include Homegoing, The Turner House, The Water Dancer, everything by Colson Whitehead and Deacon King Kong.

Ideas and wonderings aboaut people, places and spaces are why I love books. Here are some of the thoughts they have inspired in me are posted.
Currently, I am a K-12 public school librarian. Past lives include being a small town daily newspaper editor and paralegal. Whatever the day job, reading and writing about books has been a constant.

The books I review and comment on are sent by publishers and authors, or I have purchased them or checked them out of the library. I do not accept self-published material at this time.